Although Institute on Aging is not a Jewish organization, we trace our roots back to the Jewish community’s traditional sense of family and its commitment to caring for elders with dignity. Institute on Aging’s founders saw their mission as an expression of this heritage, which goes back some 4,000 years. Today we are honored to carry this commitment forward. 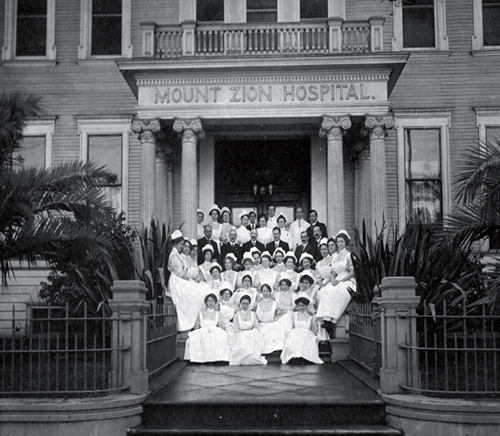 Institute on Aging’s story begins at Mount Zion Hospital, which was the Jewish community’s most visible contribution to San Francisco for more than a century. As early as the 1930s, Mount Zion was already offering home care and other services to help older adults maintain their independence. Institute on Aging’s depth of experience grew from these beginnings.

The Greying of America

By the 1970s,medical advances were making it possible for patients to receive even advanced care without being hospitalized. People were living longer—often either in nursing homes orat home alone. Isolation, frailty, dementia, and even suicide were increasingly common.

Longtime Institute on Aging Board Member Lawrence Feigenbaum, M.D., played a key role in Mount Zion’s response to the growing need for a comprehensive approach to geriatrics. As an internist and cardiologist on the medical staff, in the 1970s Dr. Feigenbaum helped Mount Zion establish the nation's first adult day health center in a teaching hospital. Then he convinced the state of California to authorize Medi-Cal coverage for this service.

Dr. Feigenbaum was also a leader in geriatric education and research at the University of California, San Francisco (UCSF). Working with both UCSF and Mount Zion, he established, at Mount Zion, the first fellowship in geriatric medicine in the western United States. Today, Institute on Aging is a community partner in UCSF’s Northern California Geriatric Education Center, which provides faculty and curriculum development, clinical student training, and continuing education for health professionals.

With encouragement from Dr. Feigenbaum and others who recognized the growing need, Mount Zion gradually expanded its outpatient services for seniors. Between 1980 and 1984, these services attracted $12 million in outside funding, a significant amount at the time for such a novel approach. By 1983, these services were logging 45,000 annual patient/client visits, and many had waiting lists.

In 1983, four of San Francisco’s most important foundations (The Richard and Rhoda Goldman Fund, the Koret Foundation, the Levi-Strauss Foundation and the San Francisco Foundation) provided planning funds for a comprehensive geriatrics program under the Mount Zion umbrella. Based on this planning, two of the Jewish community’s most generous philanthropic couples—Elise and Walter Haas and Rhoda and Richard Goldman—provided challenge grants to establish what is now Institute on Aging. Simply put, these visionaries made Institute on Aging possible.

“Let’s make the world a better place, and let’s do what others aren't doing. Let’s push the envelope and see what happens.” - Rhoda Goldman

In 1990, Mount Zion and UCSF solidified nearly 60 years of professional cooperation by merging. Mount Zion became the hub of UCSF’s outpatient services, including geriatrics, and was encouraged to continue its leadership role in the field and its partnership with Institute on Aging.

As part of Mount Zion’s merger with UCSF, an organization was created to manage and allocate philanthropic gifts to the hospital. Under the name Mount Zion Health Fund (MZHF), this grant-making charity now supports health-related community-based agencies that have past or current Jewish roots in San Francisco, including Institute on Aging.